Coming on the scene as a metal drummer in the late eighties, Dave DiCenso has since worked in a diverse array of musical contexts; from hardcore and prog, to rock, pop, jazz-fusion, funk, and soul. Along with his chameleon-like approach, he is known for his individual sound, musicality, and highly animated performances. Dave has also excelled in the field of education, and is considered to be one of the great player/teachers of our time.

Dave grew up in a musical family in a suburb on the South Shore of Boston. His father, Dick DiCenso, was a well-known drummer and educator in the area. He was Dave’s first teacher when Dave was five years old. His older brothers John and Joseph were accomplished on drums and piano, respectively. Like their father, both brothers were jazz musicians at heart, while Dave gravitated toward the rock, pop, and R&B music of the day.

Dave studied with his dad until the age of ten, then decided to take guitar lessons. These lessons lasted until age fifteen, when he chose to pursue drumming as a career-path. That same year, he had his first pro gig, filling in with a band playing a New Year’s Eve party at a hotel. At this point, Dave was playing with local rock and metal bands and discovered he was a fish out of water when the band leader turned around to “shush” him within the first bar of the first song. Despite his lack of skill for playing quietly, he began getting calls for more general business (GB) gigs, soon thereafter working regularly throughout the Boston area.

Having opted out of college after high-school, Dave joined Bad Karma – a popular thrash metal band on the Boston club circuit. In 1988, taking a three month break from the band, Dave went to New York City to study privately at the Drummer’s Collective. Here, he was able to learn from top-shelf drum set educators like Kim Plainfield, Rod Morgenstein, Zach Danziger, Frank Malabe, and Pete Zeldman.

Upon returning to Boston, Dave spent a few months studying with famed teacher, Gary Chaffee, who taught privately from his home outside of Boston. As the 90’s rolled in Dave wanted to play other styles of music and he began working with local pop and rock bands such as Mystery Jones, Farrenheit, Ultra Blue, Jon Finn Group, and Two Ton Shoe, all the while keeping one foot planted in the metal scene.

It was through a colleague in the metal scene that Dave eventually connected with the Cro-Mags; the band credited for being the first to fuse hardcore and metal in the late 80’s. In 1990, Dave came in to finish touring the band’s Best Wishes album. He would go on to do several tours and albums with Cro-Mags including 1992’s Alpha-Omega, and 2000’s Revenge, the latter featuring guitarist Rocky George, from Suicidal Tendencies. Cro-Mags’ legendary front man Harley Flanagan said of Dave in his book Life of My Own, “He was a sick f*cking drummer. He could play just about any kind of music, but he was a metalhead at heart. He hit the drums so f*cking hard – one of my all-time favorite drummers I’ve played with.”

Dave further jumped the fence into hardcore, when he recorded New York City band Shelter’s 1995 release, Mantra. He went on to record three more albums with the band including 1997’s Beyond Planet Earth, and 2000’s The Purpose, The Passion.

In 1997 Dave also recorded pop icons Duran Duran’s “Out of My Mind” for the soundtrack to the major motion picture The Saint. The following year he contributed four tracks to ex-Baby Animals singer Suze DeMarchi’s Telelove, recorded all tracks on Two Ton Shoe’s Figures and Jon Finn Group’s Wicked, and did a short stint with the Steve Morse Band, featuring Morse, the legendary guitarist known for his work with the Dixie Dregs and Deep Purple. Steve was so happy with Dave’s work he published an article about him in the December ‘98 issue of Guitar Magazine titled, “Impressed and Inspired by a Temporary Drummer.”

Another significant event in Dave’s career was in 1994 when he accepted a teaching position at Berklee College of Music. Dave says, “My bond with my students is one of the most meaningful aspects of my professional life. Teaching is honorable and humbling work, and I am grateful that Berklee has afforded me the opportunity to do such work with some of the most talented, intelligent, and driven students in the world”.

In 2001, after three years of playing exclusively with Two Ton Shoe, he exited and began again to look for side-man work. Over the next couple of years, he recorded jazz pianist Hiromi’s Another Mind, Dream Theater guitarist John Petrucci’s Suspended Animation, Extreme front-man Gary Cherone’s Need I Say More, and Jess Tardy’s Hold On – the last featuring iconic bassist Bob Glaub. During this time, he was also touring with Hiromi as well as blues guitarist Johnny A.

By 2003 it was time for a change. “I was burnt out from playing the sideman role”, he says. “I learned so much from years of fitting myself into other peoples’ music, but I needed a break from it.” One of Dave’s primary aspirations with music since the beginning was to produce and perform music he had either written himself, or through collaboration. This calling had largely gone unanswered until the second half of the 00’s, when he set out on a course of self-study to become a better song-writer, lyricist, and multi-instrumentalist. This break resulted in a six-year hiatus from performing.

During this period, Dave wrote his first instructional book, Universal Rhythms for Drumset. It was published by Alfred Music in 2009. He also made an appearance at the 2006 Modern Drummer Festival – his only live appearance of the year. Dave’s performance is considered by many to be among the most musical in the event’s history.

It was in 2011 when Grammy-nominated singer Josh Groban invited Dave to finish a world tour that had five months of dates left on the itinerary. Accepting the offer marked the end of Dave’s playing hiatus. He would go on to work with Groban for several years before choosing to stay off the road to spend more time with his family, continue to work on original music, and publish his next instructional book.

Dave’s second book Rhythm and Drumming Demystified was released in paperback through Alfred Music in 2014, and later, in digital format through Hudson Music. That same year, Dave was asked to put together a band for legendary singer-songwriter Carole King to perform at a fund-raiser for New Hampshire senator Jean Shaheen.

In 2016 Dave founded DiCenso Clark Expedition with Boston-based organist Ken Clark. This soul-funk organ duo saw Dave singing lead from behind the kit for the first time in his career. After a couple of years Dave opted out as the band’s forward momentum had ceased.

Currently, Dave divides his time between playing, teaching, and composing. He continues to be an active clinician, and offers master classes. He is collaborating on a new project with Boston-based front-man, Peter Prince. 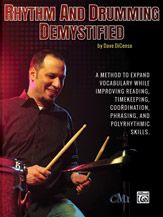 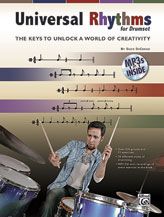